This level of instrument usually sells quietly without publicly posted sales so the only people who know what they really sell for are the seller and the buyer.  This is one of the nicest examples I’ve ever found and there are very few to be found now, so I will gladly keep it until and unless I am quite compelled to let it go. For those who are expecting a ‘reasonable’ price, best not to bother to ask.  There is nothing reasonable about this horn. 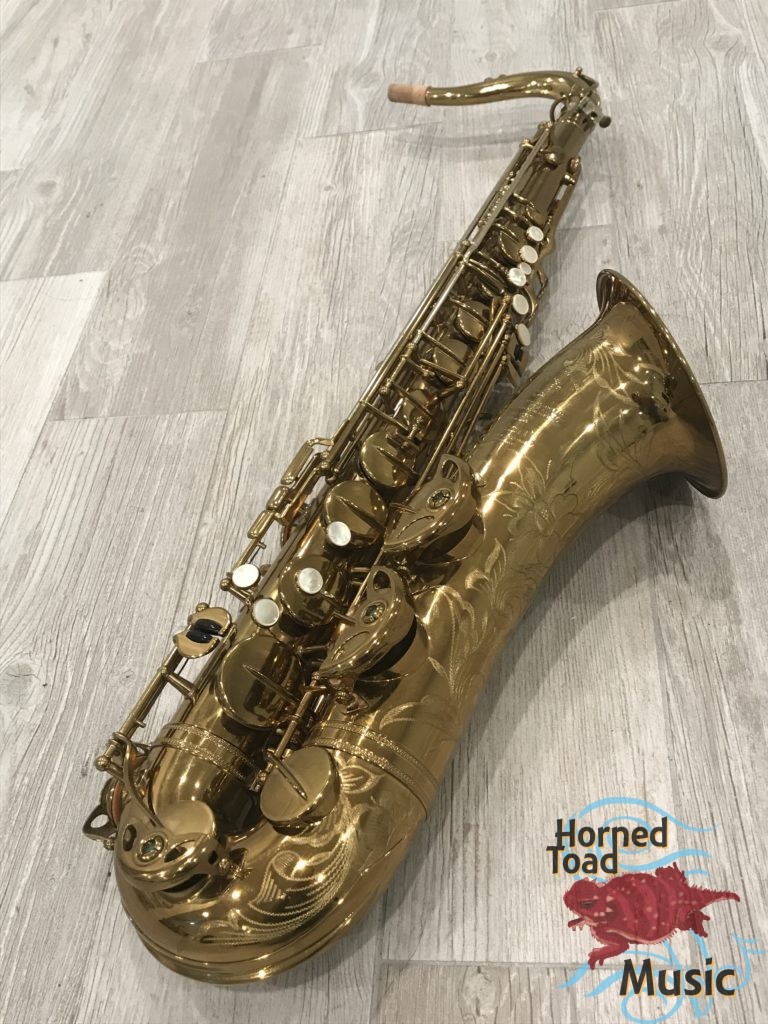 END_OF_DOCUMENT_TOKEN_TO_BE_REPLACED

This is going to be a fun one for someone.  It’s original lacquer, been played, shows some history on it, but in good condition and needs a real cleaning and overhaul.  I don’t have time to take care of it at the moment, maybe in t he future but for now I am offering it to someone to make this their special player.  These early 100k tenors just play great; a wonderful balance between quickness, punchy, brightness and vintage complexity.  This is pretty much the end of the early period tonal depth as they started to brighten up the horns (for amplification?)

There is some evidence of a life lived here, a few minor resolders of guard feet and some minor dents and dings, normal stuff.  Overall it looks quite nice with a very warm lacquer color.  It has been sitting and has some corrosion which will clean up nicely with either white vinegar or brass cleaner.  Bright dip would work well here too. There are some pads missing and it’s quite dirty so don’t ask if it plays.  It does not now but it sure will!!  The original (matching serial) neck is in excellent condition, obviously NEVER pulled down. The key pearls are also nice, almost no wear at all. Someone will get a project deal here. 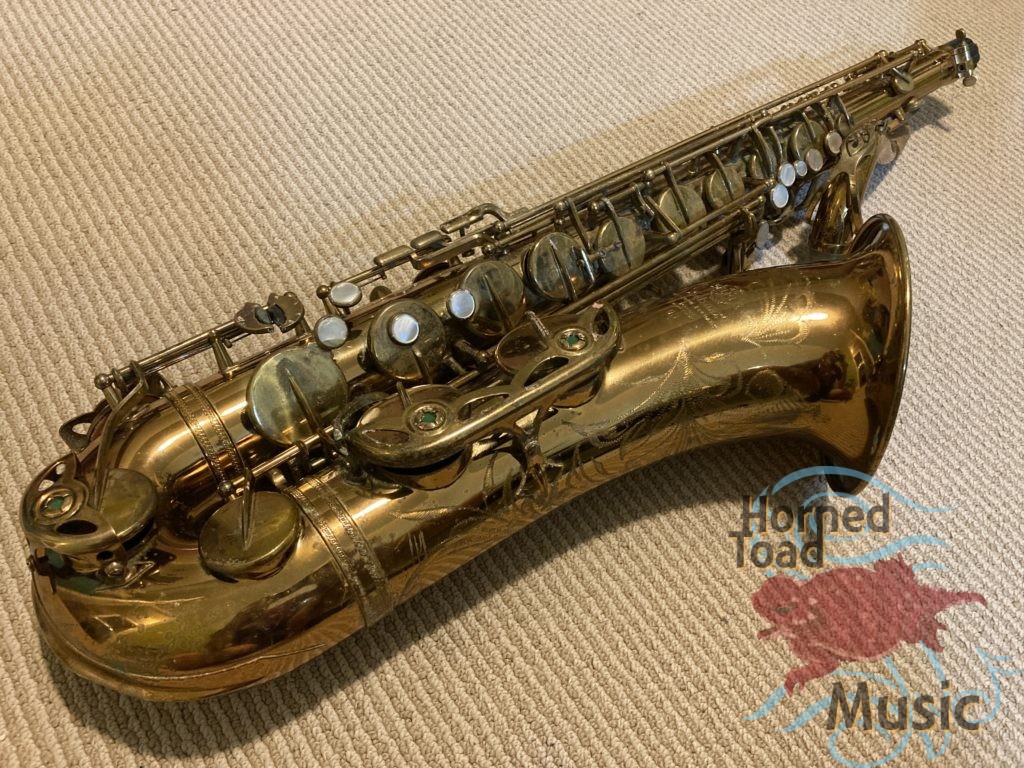 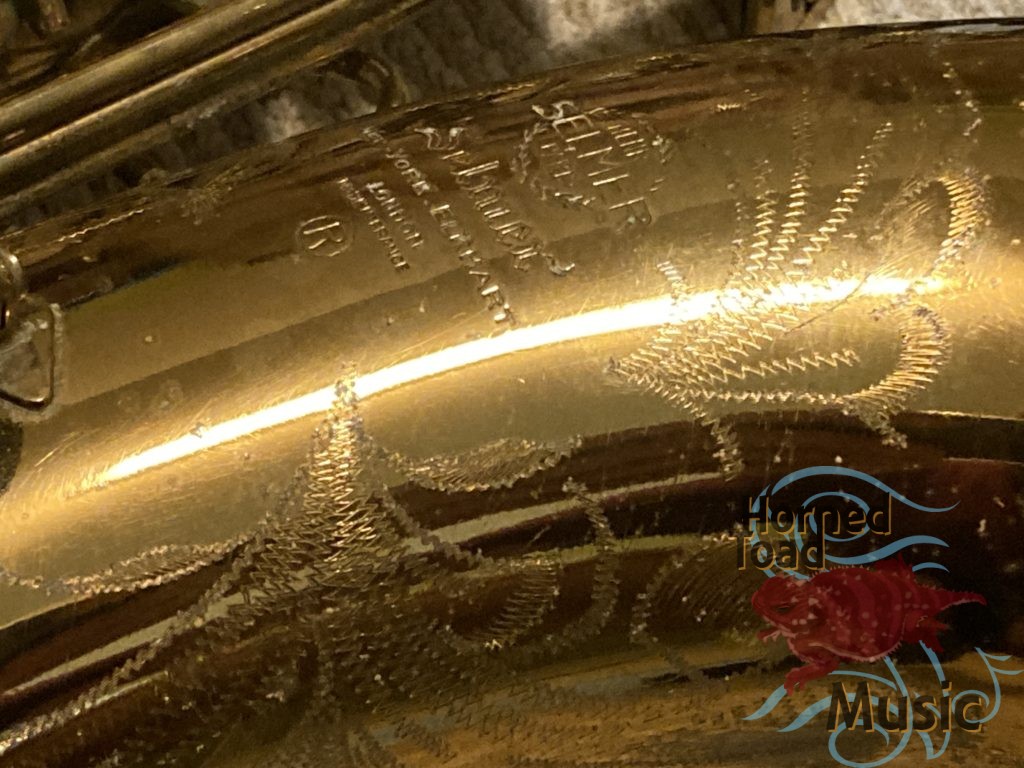 END_OF_DOCUMENT_TOKEN_TO_BE_REPLACED

105xxx Selmer MK VI, this is a sweet spot vintage of MK VI right after 100k.  Most everyone who is experienced agrees that these are especially good; punchy, focused, on the brighter side yet still complex sounding.  This is one that I restored years back and put a lot of meticulous care into.  It has large domed brass resonators and (gold) painted pads with a really beautiful tight concise feel.  In the years since I set this up I feel it has not changed much, still plays like a new horn. I recently received it back on a trade and was happy to get a chance to play it again. I’ve gone through and updated one pad and done a little adjustment.

This horn has that wonderful dark lacquer, some normal blemishes for a played horn but is in very good physical condition.  It plays very powerfully with a fundamentally dark core and very cutting edge.  It is a very fast and precise horn. 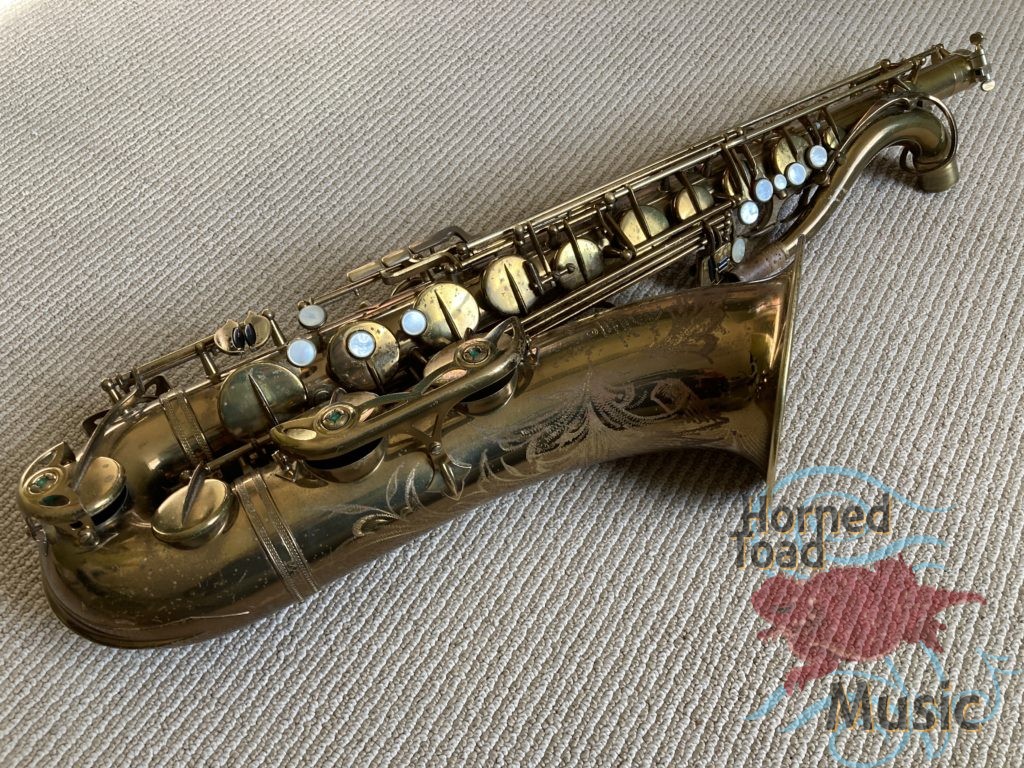 END_OF_DOCUMENT_TOKEN_TO_BE_REPLACED

Here we have a MK VII tenor, first I’ve played.  Word has it the “M” Prefix serials play better.  I cannot say if that is true but this plays really quite big and wide with a bright forward  presence that is very satisfying.  The pads are older but I’ve got it running at the moment.  I would suggest an eventual overhaul once played enough to decide how you want it set up.

This horn has lived, has normal bumps and bruises and some repairs but overall in fine shape for a player. Neck is in excellent condition, never bent it appears. The attached video illustrates the response pretty well, was a surprise to me. 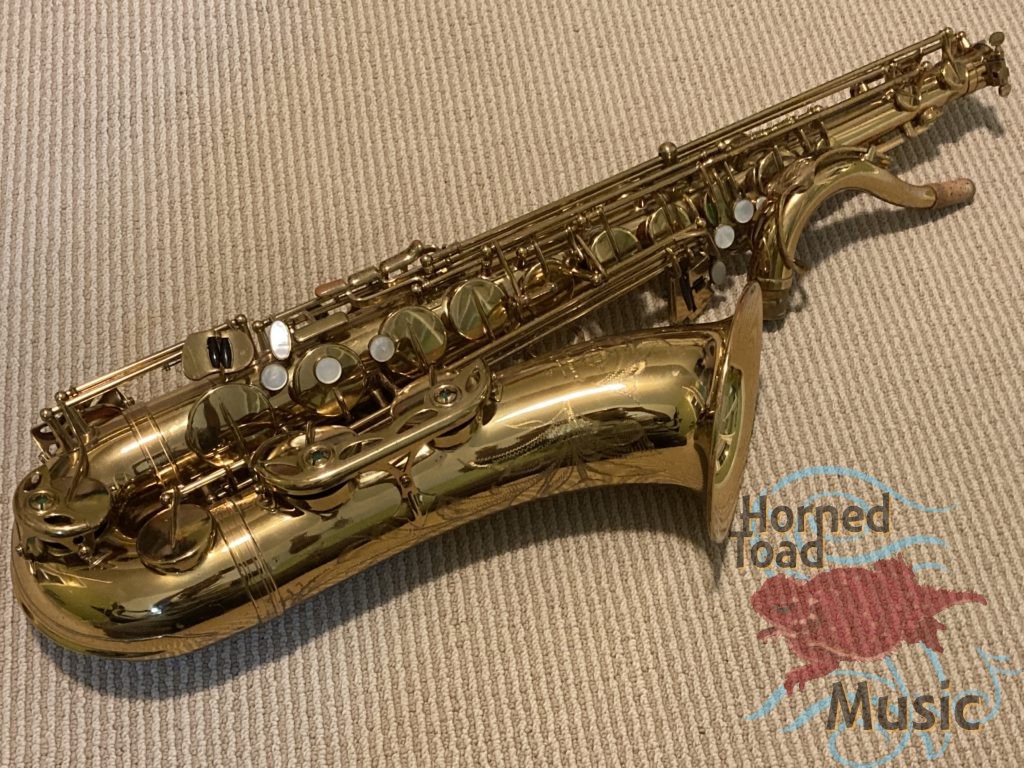 END_OF_DOCUMENT_TOKEN_TO_BE_REPLACED

Very clean untouched 6* Florida slant signature Link. Clear milling lines on original table, unaltered tip and baffle. Finding nice original examples such as this is now quite rare. This has obviously been played and has some minor cosmetic blemishes but the functional areas are all quite clean. 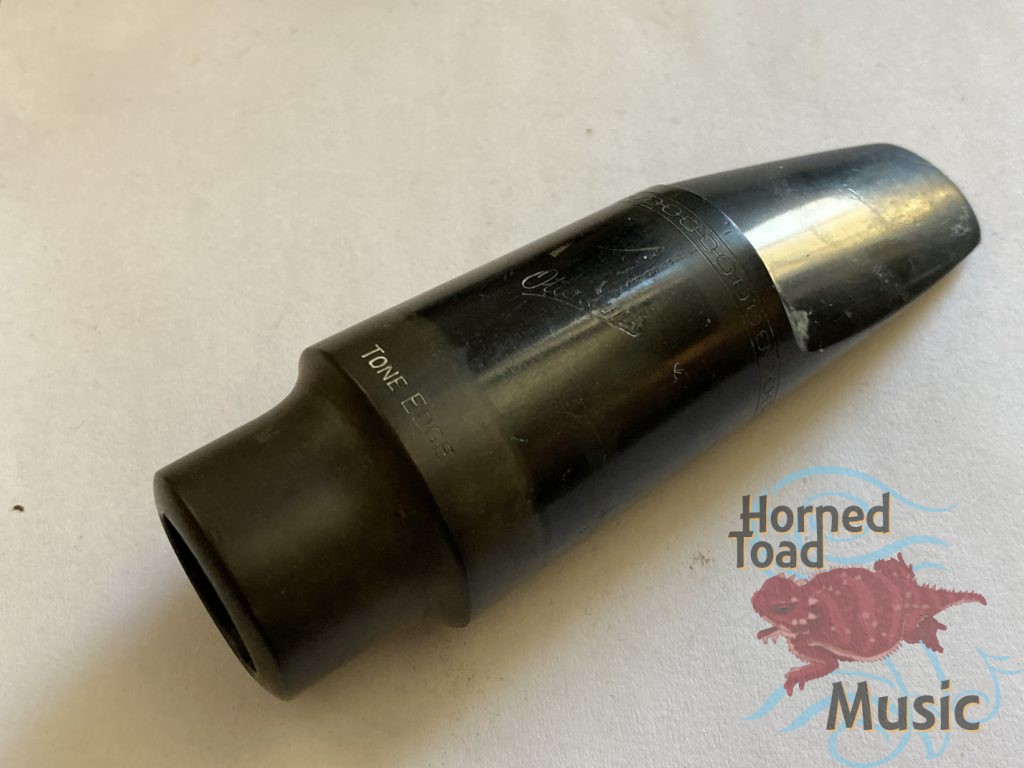 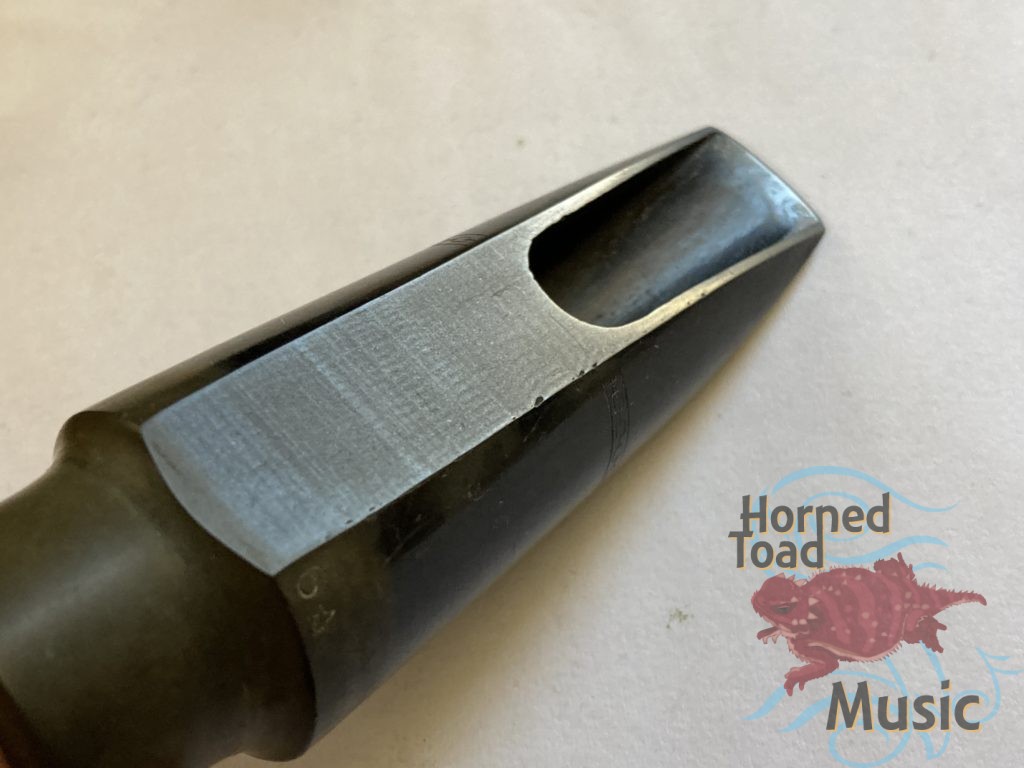 END_OF_DOCUMENT_TOKEN_TO_BE_REPLACED

The finish is original as is the neck with part of the serial scribed into the tenon as well. This horn has really lived, has plenty of scratches blemishes and some repairs but it is sturdy and solid.  It’s just not very pretty which is exactly why it is a bargain for someone hunting for a player’s mid-late 80k tenor, which are usually very very expensive and hard to find.  People love these specifically because of how they play.  Of course some people are obsessed with the Brecker mystique but again, he played these because of how they play, apparently.

With a Berg Larsen-

And with a FL Link-

This one is a bit more focused than spread on the scale of how they might play. It is quite aggressive and punchy with an edgy bright thing that takes plenty of air and turns it into power. It feels fast and nimble.  I am not a huge fan of the pads and resos but they are not especially old.  I just think it could be set up better to reach its full potential. I’ve already gone through it and got it playing quite efficiently, but this would be a great project for someone to polish up.  This will be quite an opportunity for the lucky 80k-seeker. 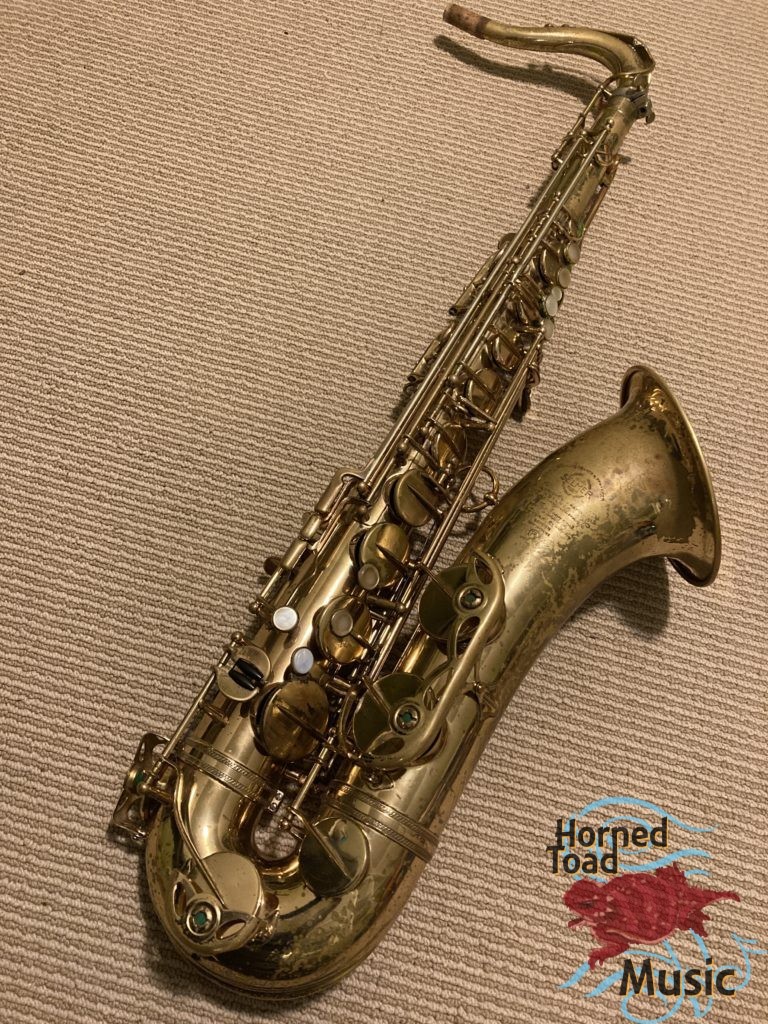 END_OF_DOCUMENT_TOKEN_TO_BE_REPLACED

This is an excellent example of the archetypal large tip size earlier Florida Link. For some unknown reason these larger tip sizes on the earlier FL really had a special thing.  They play big and very flexible, but if you get the right model they also play somehow unexpectedly easy for that size.  It’s a trick of facing and finish I guess, just the way they made these.  I’ve had many 9’s and 10’s that did just this thing, reliably.

This one is in very nice condition, untouched and not abused.  It measures at around .130 on my tools and blows very complex and easy for the size with a very significant original baffle. 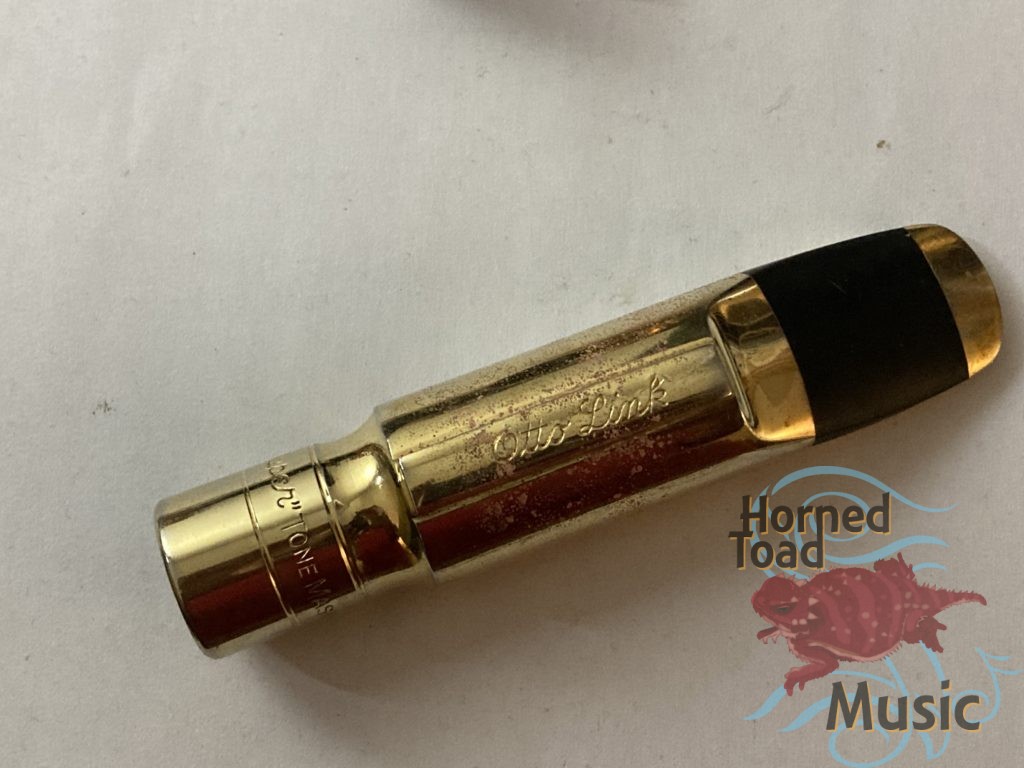 END_OF_DOCUMENT_TOKEN_TO_BE_REPLACED

This is a wonderful late FL USA stamped 7 facing that plays excellently. I have trued and optimized this facing and tip.  The finish over most of the mouthpiece is very nice yet there is some staining of the plating on the table due to a reed left attached long term I imagine.  This piece plays in a compact and concise way with a very nice flat step baffle similar to late FL hard rubber pieces of the same time period.  It has a lot of complexity and a great buzz and depth to it. Tip size.105 and set up with an older traditional Otto Link Facing curve. 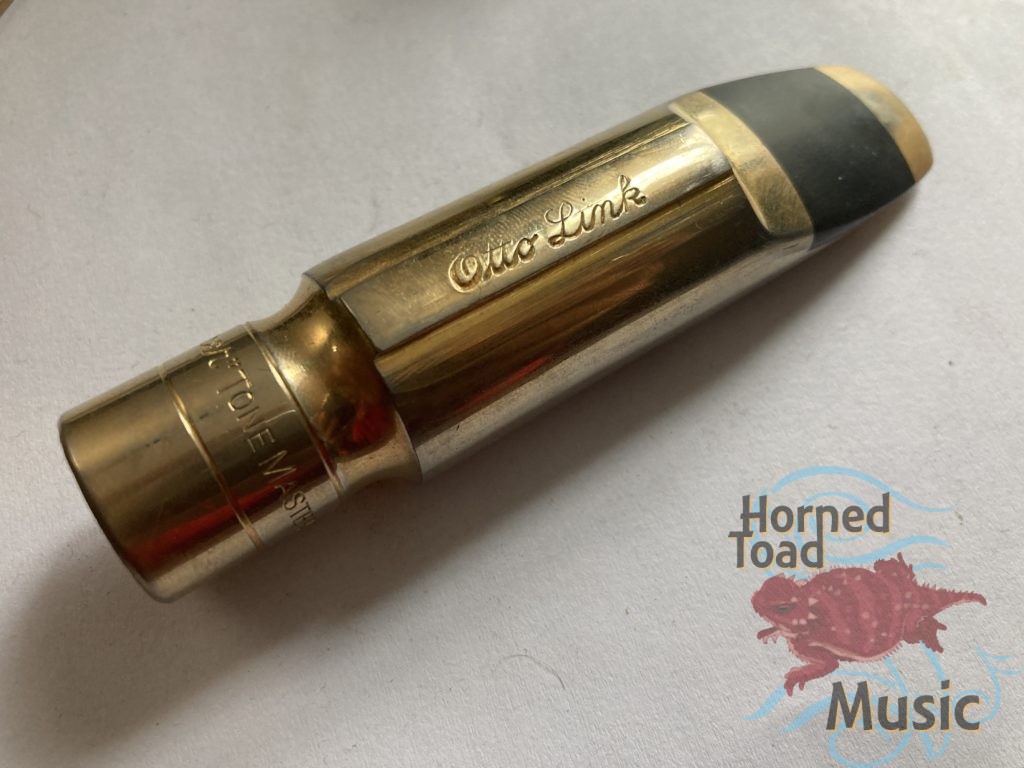 END_OF_DOCUMENT_TOKEN_TO_BE_REPLACED

Had a really wonderful hang with Josh Redman, fellow tone & subtlety aficionado; inspiringly great player and exceptionally good, smart and fun person to be around. Being able to share that level of appreciation for detail in sound is why we do this, but some people are just plain cool. 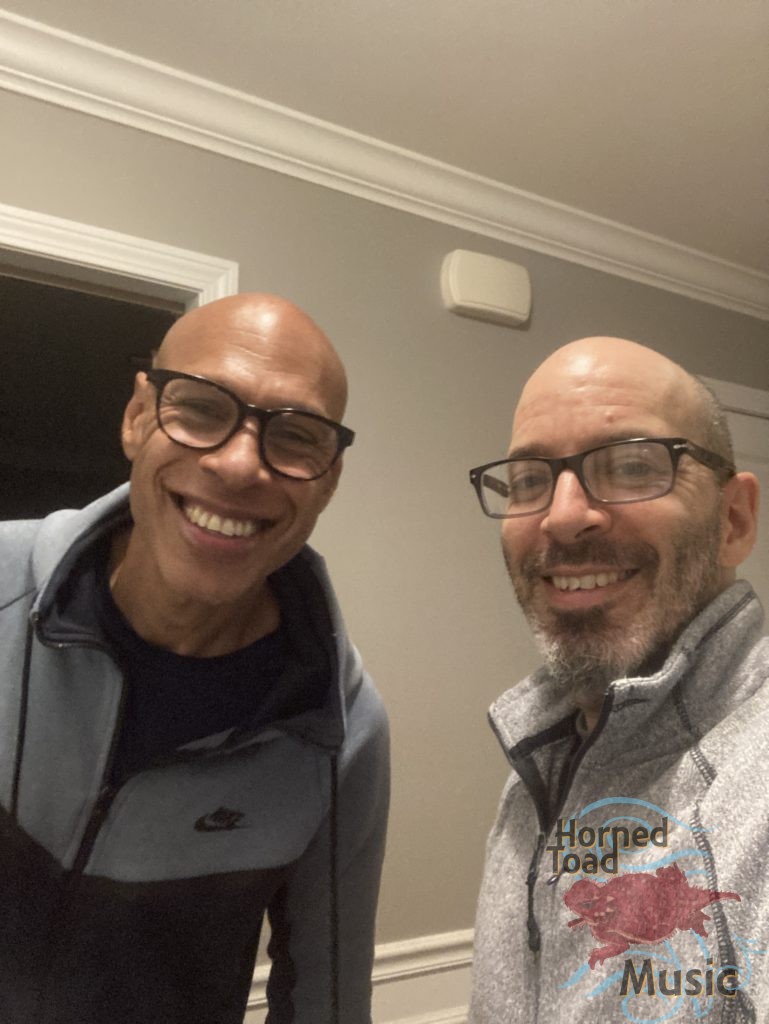 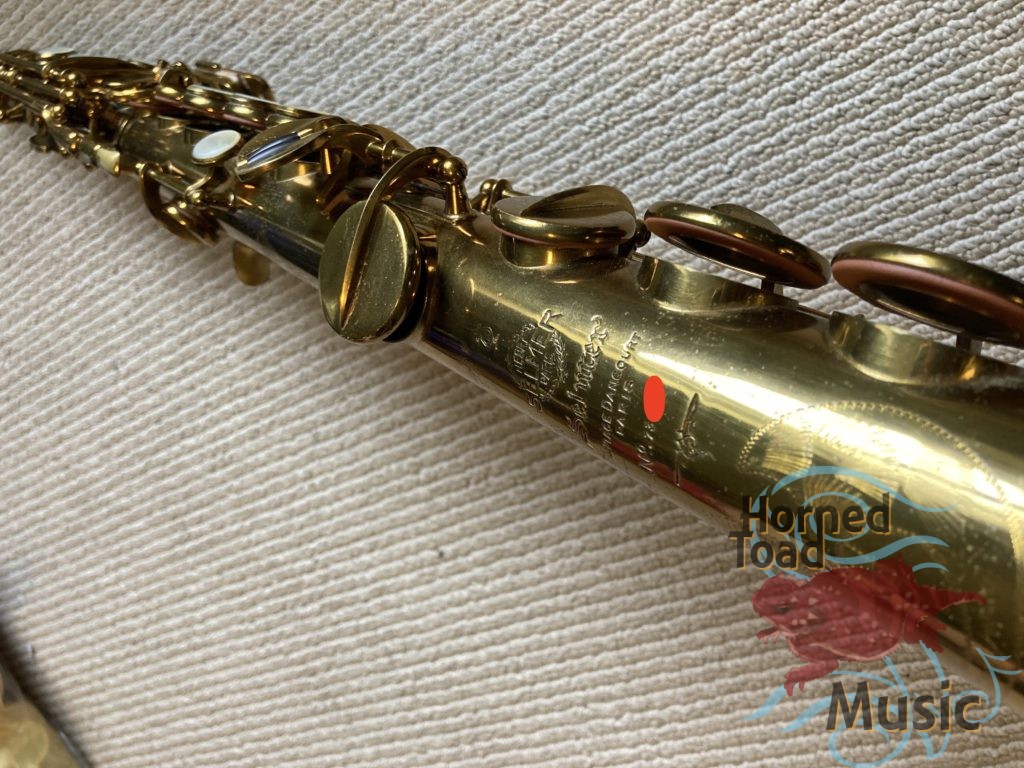 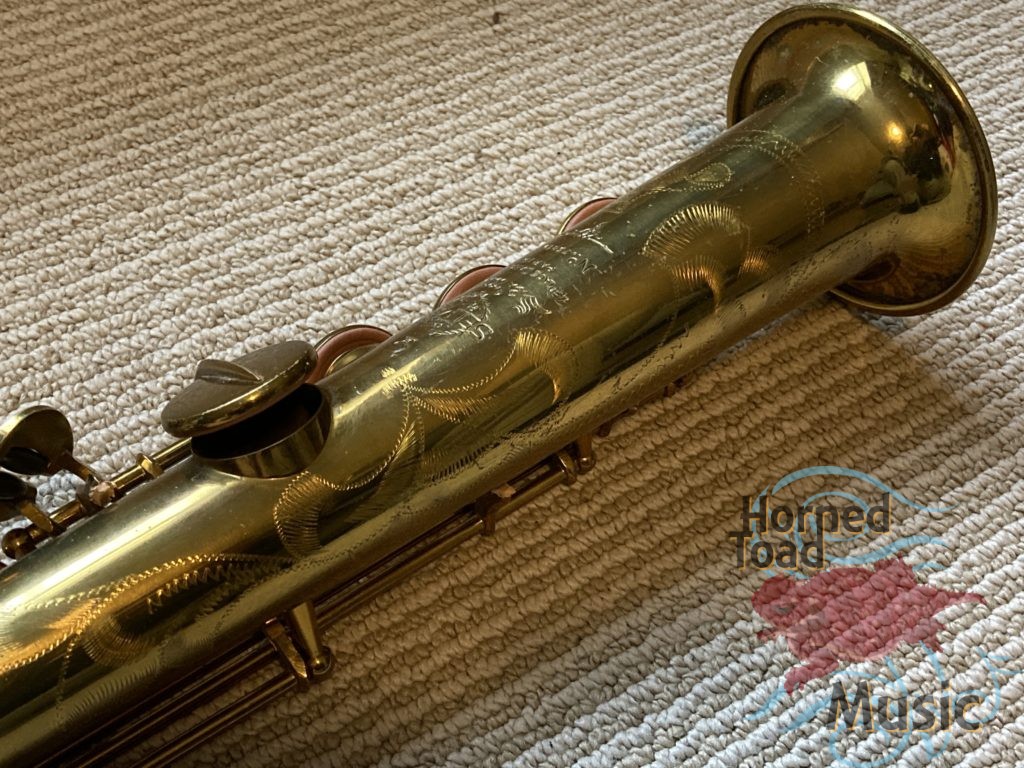